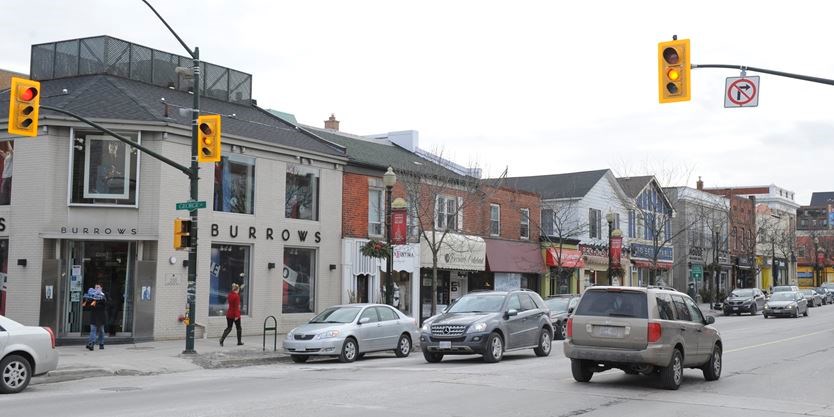 The pop-up store phenomenon is coming to Downtown Oakville and in force.

In an interview with the Oakville Beaver this week a representative of property manager Bentall Kennedy stated that eight of its vacant downtown spaces are being made available to the temporary tenants.

Pop-up retail is a trend in which a venue can offer one product or service one day and then be replaced by a new business offering a different service or product not long after.

The method is advertised as an easier and cost-efficient way for businesses to enter a new market and something that creates excitement and drives foot traffic to a business community.

“Pop-ups are very typical in an enclosed shopping centre, but not as typical in a street front location,” said Domenic Imbesi, regional director of marketing with Bentall Kennedy.

“We thought that Downtown Oakville would be an ideal location that offers great opportunity for entrepreneurs to introduce their product or service within a setting that is different than a typical shopping centre.”

Imbesi said Bentall Kennedy is looking for unique concepts for these eight locations. He noted some could possibly feature first to market product launches in the realm of fashion, electronics, and cuisine.

Imbesi said there has been considerable interest from pop-up businesses regarding this project and he hopes to have all eight locations occupied before the end of the summer.

Pop-ups that do take up Bentall Kennedy’s offer would be required to stay at their Downtown Oakville location for no less than three days and no more than three months.

Imbesi says the idea is that pop-ups that leave will be replaced by other pop-ups while pop-ups that want to stay after their three-month period can examine more long-term tenancy options with Bentall Kennedy.

“The idea is to create buzz and excitement,” he said.

“We want to create an atmosphere and a sense that there is great opportunity in Downtown Oakville. A message that you need to get down here and experiences these amazing stores while you can or you might miss them.”

Downtown Oakville Executive Director Susan Johnston said she was pleased by the impending arrival of pop-ups.

“I would say anything that brings traffic and business to Downtown Oakville is good. I think the pop-up stores might bring some interesting business concepts to downtown that might be of interest to people,” she said.

“I also think it is good for new businesses. That they are able to try a business opportunity to see if it is viable before committing to something like a year long lease.”

Not everyone is thrilled with the prospect of pop-up stores in the downtown.

Carol Vesters, owner of Swiss Interiors, which is located in the downtown core, voiced concerns about the pop-ups potentially being a source of unfair competition for existing businesses in Downtown Oakville.

“This is not positive,” she said.

“These temporary stores will have some product, which competes with the products carried by a legitimate tenant of Downtown Oakville who is trying to remain there in the long run and support the downtown community. Bentall Kennedy should be renting to real tenants and not allowed to profit while they hold on to spaces for whatever their long-range plan is.”

Vesters said the “fly-by-night” pop-up stores are not right for the image of the downtown, which she says is customer service- and community-oriented.

She also doubts these stores will do much to attract customers to the area.

“I don’t think people who would be interested in pop-up stores will be any happier with the parking situation down here than the regular customers,” said Vesters.

She is calling on the municipal government to start paying attention to what is happening downtown and look into why Bentall Kennedy is choosing the pop-up store route as opposed to just renting their spaces with permanent tenants.

“The more vacancies you have the less people go down there,” he said.

“I don’t know if pop-up stores will help, I’m not an expert, but it is worth trying.”

Hutchins acknowledged that existing businesses pay higher rents than pop-ups and that this could be a problem if the pop-ups sell the same products.

That said, he noted the nature of pop-up stores means it is unlikely this will be the case.

“While I am not aware of the specific plans or designs of potential temporary stores that will be locating downtown, I am looking forward to having fewer empty retail spaces and more shoppers,” he said in an email.

“Downtown currently has a number of empty storefronts. Temporary or pop-up stores will provide residents additional retailers to visit, reduce the amount of empty space, and generate additional foot traffic downtown. This concept is not new, it has been occurring for the past two decades in large urban centres.”

Gittings noted existing stores would have additional potential customers walking by their front doors while the temporary locations would be able to promote their brand, raise awarenessand test operating in the downtown.